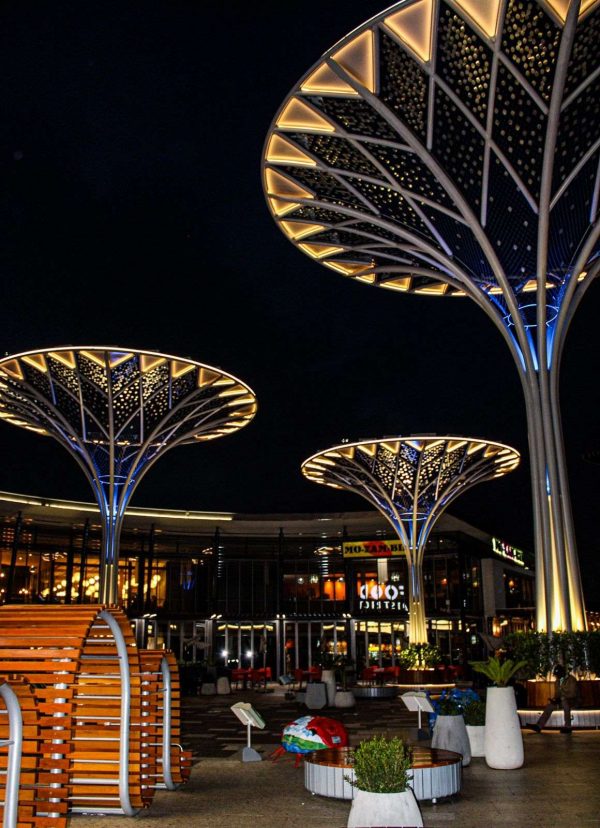 The lights won’t be going out at one Johannesburg mall this festive season. That’s because popular centre Eastgate in the east rand of Johannesburg has installed a solar plant on its roof. Delivering on its commitment to become more sustainable, and use its space optimally,  the centre also recently installed three solar trees on its piazza to light up the popular outdoor dining and entertainment area.

The 1-megawatt solar plant is made up of 2 771 solar panels and 9 inverters, which, simply by absorbing the sun’s rays, produce approximately 170,000 kWh per month. North facing, the system is able to produce 14% of the centre’s energy needs, which equates to carbon emission savings of roughly 180 tons per month. Switched on earlier this year, to date the solar plant has already saved the centre almost R 2 million in electricity, with more expected as the sunny days get longer over the Summer period. The solar plant was made possible by collaborating with Solareff, Solink, Eskom and the Ekhuruleni Municipality.

Further enhancing the centre’s carbon emission reduction, the solar trees on the piazza come alive in the evenings for approximately 5 to 6 hours, with the largest one being 13.5 meters in height and 14 meters in diameter. These stately installations were inspired by the aesthetics of the African Baobab and are completely self-sustaining. Eastgate’s commitment to sustainability does not end there. The centre recently implemented a recycling system for used paper, plastic, cans and glass, via reverse vending machines. By creating a profile on a smart phone app, shoppers are able to enjoy benefits simply by recycling materials that they no longer need.

Shoppers have much to look forward to this festive season including extended trading hours, live entertainment on the piazza, a visit by fan favourite Father Christmas, gift wrapping services, as well as the popular Festival of Fun which return to the centre this festive season, with seven funfair rides, to be enjoyed purely as added value for shopping. This is additional to popular attractions at the centre which include the rooftop drive-in, the go-kart track, big screen, cinemas and over 200 retail outlets.

“Eastgate is ready to welcome families and shoppers of all ages this festive season” said Kelly Belman, General Manager for Eastgate Shopping Centre. “Our centre will not only surprise and delight you, but you can be rest assured that you’re in a centre that is kind to the environment” she added.

For further enquiries about Eastgate Shopping Centre and its tenants, visit https://www.eastgateshops.com.

Menu
PrevPreviousBespoke gin, with a view!
NextLoad Shedding Kit from the Crazy StoreNext
On Key