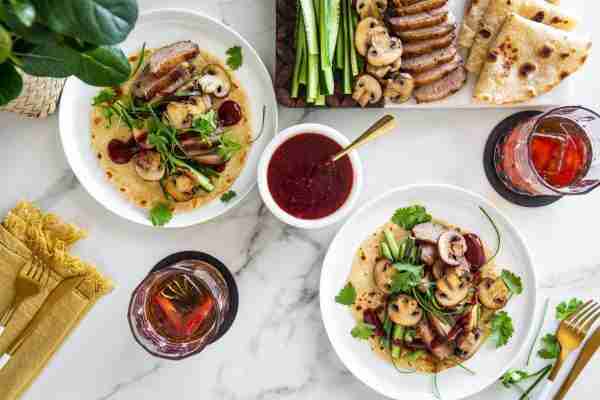 Rub the flesh of the duck breasts with the five-spice and salt.

Place duck breasts skin side up on a rack on top of a tray and refrigerate overnight to marinate and let the skin dry out.

Mix the flour and salt in a heatproof bowl.

Pour in the boiling water and mix until a dough forms. Once cool enough to handle, knead the dough until smooth. Cover with plastic wrap and allow to rest for 20 minutes.

Working with two balls at a time- flatten them into little discs.

Brush oil on the surface of one disc.

Then overlay with the other disc.

Roll out the two pieces sandwiched together into 20cm pancakes.

Brush a non-stick frying pan on medium low heat with a little neutral oil and place one pancake into the pan. After a minute, you should see air pockets begin to form between the two pancakes. Flip the pancake until both sides have faint little golden brown dots on them.

Remove the pancake and when cool enough to handle carefully pull the two pancakes apart at the seams. Place finished pancakes onto a plate and cover with a dish cloth.

For the plum sauce:

Place all the plum sauce ingredients in a saucepan. Mix and bring to a simmer over medium heat. Cook until the plums are soft, falling apart easily and the sauce is thick.

Switch off the heat, using a stick blender, blend until smooth. Set aside.

Place the breasts skin-side down in a cold cast iron frying pan over a medium-high heat.

As the duck cooks and the fat renders, tilt the pan towards you and spoon out the excess fat.

Cook the duck breasts until the skin is deeply golden brown and crisp. At least 10 minutes.

Turn over and cook for about 3 minutes on the flesh side. To test the doneness of the duck breast, press it with your finger – it should be firm but still springy to the touch. If you have a meat thermometer, it should read 54˚C for rare, 61˚C for medium and 65˚C for medium/well done. The best cook for these pancakes is medium.

Allow the duck breast to rest for 10 minutes before slicing.

In the same pan with a little residual duck fat, fry the mushrooms until golden brown.

Season with five-spice, salt and pepper.

To assemble the pancakes:

In a glass filled with ice combine the brandy, vermouth and bitters.

Stir well (or shake in a cocktail shaker for a slightly weaker drink).

Strain over ice and garnish with fresh plum slices.

This recipe was sponsored by SAMFA