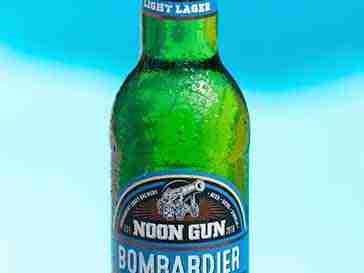 The Noon Guns on Signal Hill – symbols of strength, reliability, and endurance. An inspiring legacy to behold and a truly outstanding way to hear that it is finally lunchtime and surprise those unsuspecting visitors!

Since 1806, these two trusty keepers of time (18-pounder smoothbore muzzleloaders), have survived various foreign occupations, stood strong through wars, and have been hauled from the Castle of Good Hope to Signal Hill. They refused to be left in the past with other outdated antiques and as accurate as the atomic clock that keeps the actual cannons updated, Noon Gun Breweries plans to stay just as updated and original..

Noon Gun Brewery’s team combines experts from many different fields starting with its brewmaster, Arno Matthee, with over 30 years of brewing experience. The company started in 2015 when they purchased the old Camelthorn Brewing equipment from Namibian breweries and the rest is history.  And are now also producing a premixed G&T call ed Ginnic

It launched with draught beers only and targeted a few outlets and grew their sales through a combined effort from their passionate team and the outlet owners and saw quick growth over a very short time.

Well, Dr.Bae enjoys a G&T or a glass of wine from time to time, His adult beverage of choice has always been an ice-cold beer. He enjoys trying beers from different countries when we travel and when new brands launch in the SA market. So, when a new brand called NoonGun Brewery approached us about reviewing the range, it took little/no convincing to get Dyllan on board to be a part of this review.

The beers arrived for review and our initial thoughts were that the packaging looked great. Dr. bae’s two most favourite beers were the IPA – Dyll says this beer had a crisp, clean taste and it stands up to a true IPA. This is possibly the best he’s tasted thus far. This beer is very satisfying after a long day. It’s refreshing and fulfilling all at the same time. with an explosion of frothy power. This beverage was not heavy and it didn’t cause any bloating. This IPA was extremely easy to drink.

Next up was the GunSlinger Pilsner – this refreshing beer had a fulfilling flavour with a combination of biller hops and has a subtle fruity sweet taste which comes through. This is a real mans beer.

For decades, beer connoisseurs around the world have held heated debates between which is better; a lager or a light beer. In the world of beer connoisseurs, light beers have grown in popularity – often seen as the drink of choice for those wishing to manage their alcohol consumption or calorie intake. Part of the thinking is that by opting for light beers, which have a significantly lower alcohol content, it will allow consumers to drink more beers in a shorter period without becoming intoxicated.

Despite a number of big brands claiming to be the creators of the light beer, the true father of light beer was Dr. Joseph L. Owades, a biochemist and Rheingold Brewing Company employee who, in 1967, formulated a beer with reduced carbs and calories by removing starch. His creation was dubbed Gablinger’s Diet Beer. While the concept was great, the beer, unfortunately, was not but was quickly caught on with all the major beer companies adding it to their product lines.

While many South Africans have appreciated light beers, a new entrant to market plans to shake things up. Enter Noon Gun Brewery, a family-powered, and forged their own path micro-brewery in Muizenberg, who is targeting the lighter side of the beer market.

A recent survey on SA craft beer claimed that pale lagers remain the most popular beer style. Leonard Henning, GM of Noon Gun Brewery, believes that there is a large market eager for light beer in South Africa.

Henning explains that South Africans were brought up with the proverbial “lager in a hand”. “People are used to crispy clear lagers or pale beers, but this is slowly changing to include other styles of beer.”

He points out that the market is eager. “There are many sports enthusiasts who like craft beers, but with the high alcohol content and energy per milliliter, it makes them unable to enjoy as much as they like. With the introduction of the Bombardier Light Lager we can offer the best of both worlds; a great tasting craft beer, but with lower alcohol and reduced kilojoules, making it a perfect beer for sports enthusiasts, people watching their weight or even those who just likes to enjoy a few pints without getting overly intoxicated.”

But what makes a light beer different?

Arno Matthee, Master Brewer of Noon Gun Brewery, says that, generally, any light beer has less alcohol and overall kilojoules compared to its standard version in the market. “Light lager, sometimes spelled ‘lite’ lager, is a scaled-down version of the parent lager. Normally about 1% – 2% lower in alcohol by volume (ABV).”

Bombardier Light is around 40% “lighter” than Noon Gun’s standard lager, at only 3.3% ABV it already has 1.5% less alcohol than our standard lager. “As for energy, it comes in at 132kj/ 100ml, which is quite low while maintaining a great tasting beer,” he points out.

There are also differences in the way that larger beer manufacturers make light beer in comparison to some microbreweries. “Big manufacturers normally use a corn syrup or sugar to make a light beer as these are more fermentable in larger batches. For our light beer we use rice,” explains Henning.

If the global trends are anything to go by, light beer is certainly going to continue to gain traction in the local beer marketplace. The Bombardier Light Lager is currently available at several outlets and retailers, for example, The Bay Restaurant at False Bay Rugby Club, The Press Bar and Grill Sea Point and Craft Burger Bar Sea Point. As for retailers, at you can find Bombardier Light Lager at a number of outlets, including; Liquor City Claremont, Tops Welgedagcht, Aurora Tops Durbanville and The Village Tops, to name a few.