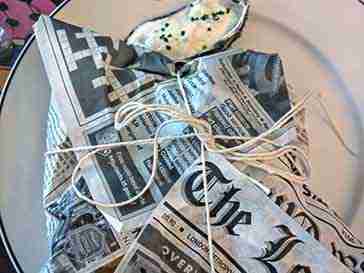 It’s no secret that Dr. bae and I enjoy treating ourselves to regular fine dining experiences, new restaurants and our best is finding hidden gems in the city of gold. We work hard, so we deserve to treat ourselves right.

We found out about a new little oyster bar on Jan Smuts and decided WE HAD to try it out. When we first arrived the first thing I noticed was that I didn’t care for the street parking, or the juveniles drinking from brown paper bags under the stairs. This isn’t a venue I would frequent alone, as a female wearing heels on a Saturday arvi.

While the shops around us were all closed and the building a little run down, when I did get to Shucked I was pleasantly surprised. While tiny, like a restaurant for ants, I enjoyed the candyfloss pink walls, pink chairs, and green hanging plants. This little restaurant reminded me of a coffee shop in London. I was super excited to see what delectable items the restaurant had on offer.

The first thing I noticed when I arrived was how eclectic the crowd was. At one table was a group of tatted-up hipsters, the next table had a couple of uber-stylish friends splashing out on champers, the next table was a regular couple on a date and then there were some weirdo’s in the corner, oh wait, that was us. I enjoy restaurants that welcome a completely different mix of people who would not normally come together.

There isn’t much seating, so a couple of people were seated on the narrow balcony outside, because everyone wants to enjoy a meal while watching the traffic on Jan Smuts right.

I ordered a pina colada (R65) and Dr. bae ordered a castle lite draught (R60). My Pina Colada took quite a while to arrive. It arrived at the same time as my starter. I’m not sure how long the wait was but when it did eventually arrive it was mediocre at best. I’ve never had a pina colada before that just tasted like ice and syrup. It’s difficult to justify the R60 price tag, for a beer especially when you can go to a restaurant down the road and pay half that price. Our friends ordered cocktails which arrived 3/4 full, at R90 a cocktail this didn’t seem normal, I’ve actually never seen anything like it at a restaurant before. Did the waitress take a swig on the way to the table? Did the cocktail spillover? Do they measure the cocktails and then just use giant glasses to serve them in? I have so many questions, but alas It’s a mystery.

We then ordered some fish and chips with mushy peas (R195). The fish was meant to be battered kingklip but to be honest, based on the size and taste of the fish I honestly believe it was hake. It looked, smelled and tasted exactly like hake, and I’ve never seen a piece of Kingklip that large before and I’ve eaten Kingklip at some of the best restaurants in Johannesburg and Europe alike. Although I must admit I’ve never had battered and fried Kingklip before. Could this be the reason why it tasted so different?

The chips are actually 4-5 thick, large chips and the mushy peas are a tablespoon of mushy peas. The food was not seasoned at all and needed loads of salt, and tomato sauce to get it down. This main was served with tartar sauce in an Oyster shell. One of the people at our table actually thought this was a complimentary oyster and gulped it down. The main was very average and it was difficult to justify the price tag. The main was served with a side which was a rainbow salad. This was ribbons of carrots in vinegar and it was delicious, possibly my favourite part of the meal. The acid from the vinegar helped break up the rich starchiness of the fish batter and chips.

We opted not to have dessert and go back home to Netflix and chill a little as it was starting to get a little cooler.

What was the damage? R725, R800 with the tip for two beers, one pina colada, 6 oysters and two fish and chips. While I’ll happily spend my money when I feel I’m getting value for it, this restaurant didn’t deliver on the basics, nevermind live up to the hype for me, nor did I find it a restaurant worthy of my hard-earned cash.

I kindly and specifically asked for the bill to please be brought to me at the bar after I had chatted to the owners, and not be taken to the table where my fiance was sitting – as it was my date night treat. The cherry on top, they bought the bill to the table 5 mins later. Am I right to feel annoyed by that or am I catching feelings? I made a simple request and have never had a restaurant not honor that request before, as mentioned this restaurant was tiny, like a restaurant for ants so it’s not like they could not find me. Total disappointment.

Con’s: Over priced, under-seasoned mains, convinced I had hake but paid for Kingklip, mediocre drinks.

I won’t be back. Joburg offers too much variety and value for money, but a mere stone’s throw away.  I also highly recommend the owners hire a PR manager who has experience in crisis comms, customer complaints and who can offer an explanation for the long waits, half-filled drinks and an over-priced menu that claims to offer Kingklip but actually offers hake.

P.S. I was not invited to this restaurant for a review, I went there on my own accord and spent my own cash. This is my first negative review on the blog. While my intention is not to bash a brand, I left feeling ripped off and felt I needed to share my experience with my readers. I did try to mention the positives where possible too. There’s one thing I dislike and that’s the feeling of being ripped off and that’s exactly how I felt when I left this restaurant.