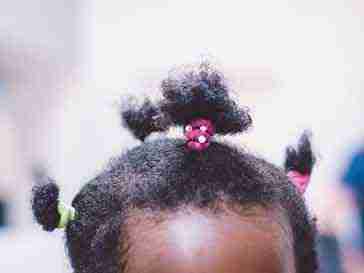 You’ve seen me write about CSR initiatives on this platform before, but it’s usually around how you can get involved and the topics are usually food related. I came across this initiative called Nka’Thuto EduPropeller and I was inspired to share their messaging with you guys. Find out more below

Nka’Thuto EduPropeller, is a Non-Profit Organisation (NPO). Founded by Ms Thandeka Mhlanga and Ms Thulile Khanyile it aims to create an environment for high school students from disadvantaged backgrounds to become innovators and TechnoPreneurs. Nka’Thuto allows children to be creative and have fun while learning how to solve problems in their communities using innovation, science, technology, engineering and mathematics (iSTEM) principles. Through a series of innovation and research methodology focused workshops the learners are challenge to not only solve societal problems using iSTEM but to further convert their solutions to business cases.

Nka’Thuto provides the relevant tools which include but are not limited to computers, laptops, connectivity, mentorship, career guidance and industry exposure to assist them to achieve this goal. We’re creating game changers! Wouldn’t you love to see their business savvy innovations?

The learners are put into business teams and placed in a highly challenging TechnoPreneurship programme where they are provided with further skills to take their ideas and innovative solutions to greater heights. The programme exposes them to experienced entrepreneurs who provide them with the knowledge required to create these business cases using the business canvas model. The ultimate TechnoPreneur and winner is selected by a panel of business developers and investors that these high school learners have to pitch to. We are developing future leaders and change makers here and as much as this generation of teens wants to play, they also don’t want to be treated with kid gloves. So we challenge them to tap into the potential they possess but have never been given the opportunity to.

A celebratory gala dinner will be held on 6 December where the winning business case will be announced. The business cases which meet a Nka’Thuto criteria for prototyping will be developed further with the aim of business development for the commercial space. We invite you, South Africa’s finest journalists to join us at this prestigious gala dinner in order to shine the light on Africa’s rising stars and document their journey. We aim to inspire others, especially female entrepreneurs to join the movement.

Meet some of the learners whose projects will be further developed into business cases at the Nka’Thuto TechnoPreneurship workshop. A total of 10 projects were selected through a rigorous judging progress and were chosen amongst 89 projects in September 2018. 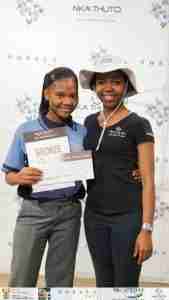 Addressing United Nations (UN) sustainable development goal (SDG) 6 is Agiyonke Dlephu (13) from Vosloorus Secondary School. With droughts presenting as a major challenge in water accessibility and sustainability she took to exploiting the science of states of matter. She identified that the application of heating saltwater results in the separation of salt crystals and water. She developed a prototype using a tripod stand, Bunsen burner and other apparatus typically found in a science laboratory to prove her concept. The result was the harvesting of clean water which could be used to address water scarcity. 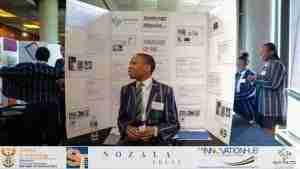 Siyabonga Mbuyisa (16) from Vosloorus in Johannesburg is currently in grade 11 at Leondale High School. He is concerned by the number of deaths that occur as a result of limited organ donations. He believes that a challenge that contributes to this is the late harvesting of organs as a result of the lag time in paramedics being alerted of donor who has recently become deceased. He has conceptualised and is in the process of developing a wearable device called TAKE CARE OF ME. The device will send relevant information pertaining to the deceased registered donor to enable paramedics to quickly harvest the organs before they lose viability and can subsequently save another life. 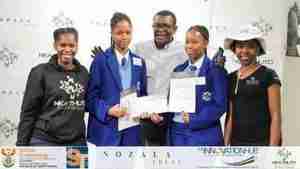 Meet Precious Kgoahla Lerato and Ledwaba Precious. In their own words they wrote, “Water is a very precious resource and its scarcity deters life as a whole. South Africa’s rainfall avatar is about 45ml annually, which is half the global average. About 1000 litres of water are wasted daily at schools. Using waste water is the next step to preserving our water. Plus in many disadvantaged schools, learning is disturbed during water stress. The aim of our project is to save water by reusing flushing water for school toilets”.

The pair developed a prototype that incorporated a sand-based filtration system and ash from burnt wood collected from the fire the school uses for its feeding program. The filter separated solid waste from liquid waste while the ash is used to kill microorganisms such as bacteria in the water. Because their system runs on electricity they decided to collect the solid waste and exploit the presence of methane in the waste to generate energy. The water is then redirected back to the sanitation system of the school. They stress however, that the water recovered from their system can not be used for drinking as it does not meet the standards for drinking water.

Ms Thandeka Mhlanga is the co-founder and co-Executive Director of Nka’Thuto EduPropeller. She also teaches Physics and Mathematics to creatives at the Academy of Sound Engineering. She currently holds a Master of Science (MSc) in Physics (Cumlaude), from the University of Kwazulu-Natal. During her MSc studies she excelled, producing numerous scientific outputs in the highest ranked optics and physics journals, including Optics Express and Nature Communications, with work that made international news. She has won several awards for her excellent performance, presented her work at both national and international conferences, and recognised as an outstanding scholar in a traditionally male dominated field.

Currently she is pursuing her 2nd Masters in Innovation Studies at the Wits Business School (WBS), where she seeks to develop a framework in which emerging technologies can be used to leverage on the 4th Industrial Revolution as they are taken through the innovation funnel to create value for the African continent and thereby catching up to the developed world. She also holds a Post Graduate Diploma in Business Administration (PDBA) from the WBS, and is a director of ScienceGap Productions Pty (Ltd), creating content for science educational shows, cooperate videos etc. Thandeka believes that the sky is not the limit, the mind is.

Ms Thulile Khanyile is a lecturer and PhD candidate at the University of the Witwatersrand (WITS). She is the co-founder and co-Executive Director of Nka’Thuto EduPropeller. Her highest qualification is a Master of Science (MSc) in Medicine degree from WITS University. She is a recipient of the National Youth Development Agency (NYDA), 2nd South African Youth Award (SAYA) in 2017 in the Academic Excellence category; the KZN Young achievers award in the academic development category (2017); and the Department of Science and Technology (DST) Women in Science Award (WISA) in 2015. She has co-authored a peer-reviewed article in the Journal of Biophotonics and has coauthored an article in popular science magazine Quest. Her research findings have been presented in various local and international conferences. She has received research grants such as the NRF Thuthuka, WITS Faculty of Health Sciences seed funding and the Medical Research Council (MRC) – Soweto Matlosana Collaborating Centre for HIV/ AIDS and TB (SoMCHAT) research grants which are targeted at new and emerging researchers such as Thulile.